Adopting or Fostering a New Dog or Cat? Learn the 3’s!

Whether you just adopted a new kitten, or decided to foster a rescue dog, adding a new pet to your household can be a whirlwind of an experience for many owners. As a professional dog trainer and pet sitter in Milwaukee who has watched this transition countlessly, I’m here to share some pearls of wisdom that may help you prepare for what’s ahead with your new pet.

There is a lot of change happening for your new pet, so it’s not uncommon for the pet’s behavior to change accordingly. Owners often call me shortly after taking on a new pet, saying it is acting in ways they never saw before. This can be incredibly discouraging, challenging the building bond between the owner and pet.

So I always try to prepare my new pet owners by explaining the magic 3’s: 3 days, weeks, 3 months. These are estimated marker points that are most common to see behavioral changes from your new pet.

3 DAYS. Put yourself in your new puppy or rescue cat’s shoes. Everything you have known has changed, and you are in a completely new environment that you haven’t quite learned yet. Those first 3 days can be incredibly overwhelming, and pets don’t always “act themselves” during this time frame. Adrenaline is generally boosted for the new pet during this time, making behavior more reactive and less predictable. Many are too stressed or shut down to show their “true colors” just yet. Some are manic, testing and pushing buttons to see what they can get away with. Long story short, the first 3 days could be very telling, or they could also go out with the bath water!

3 WEEKS. You’ve been out of the shelter for a whole 3 weeks now, and you’re starting to realize this new home is safe. You are bonding with your humans who have shown you nothing but love, and you’re beginning to trust them. You’re mastering the environment, and beginning to recognize patterns, such as when the humans leave and arrive home from work. Feel-good hormones like serotonin and dopamine begin to increase and combat the negative adrenaline and epinephrine surges. This is often the time a new pet starts to feel comfortable, and let their guard down. Enter behavioral changes, stage left. When I assessed my rescue Chihuahua at animal control, he was the only one who wasn’t barking. He didn’t make a peep the first 2+ weeks we had him. Then week 3 hit, and he wouldn’t shut up. For those with other pets in the home, this is the most common time for potential altercations amongst them, as the hierarchy develops with time. 3 weeks is also the most popular time for me to hear about aggression and anxiety cropping up. With that said, I affectionately call the 3 week marker the “make or break” moment for many human owners. But hang in there, and see what you’ll discover at…

3 MONTHS. This is the estimated time is takes for a new pet to fully settle down into a routine of a household. Trust and love has been built, and your new pet has an overall sense of security. Predictability is comforting, and it may take several months of repetition for your new pet to feel this way. I sometimes joke with my clients that it usually takes a moment to love your pet, but it often takes months to like your pet! 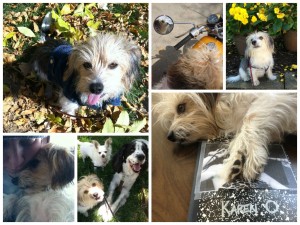 Sweet Karen O at the one year mark!

KAREN O, A CASE STUDY. As a professional dog walker and pet sitter, one of the most rewarding parts of our job is watching as a new pet blossoms and grows, alongside their human owners. We are blessed to be a part of that process, much like a teacher watching his or her students grow and learn throughout the school year. Karen O is a young adult Terrier mix, rescued from a presumed puppy mill. KO was matched perfectly with her patient humans who were committed to helping their shy girl come out of her shell. I was privileged enough to become her professional dog walker 5 days a week immediately after her adoption.

The first 3 days KO was afraid of her own shadow. On our very first visit together, a delivery man had packages on a dolly, and KO was so terrified of this monster on wheels, she urinated in fear when she first saw it. KO was timid, and had low resiliency for stress and new environments. Though sweet with me, she was hesitant to allow me to put her walking harness on, and often shut down, refusing to leave her bed in her kennel (her safe place).

When 3 weeks hit, KO’s confidence began to grow. She started to show comfort behaviors, such as eagerly greeting me at the door. KO developed an adorable “skip” of the back legs when she is proud of herself, like after successfully going potty outside. KO was still spooked by new and random things, but she was beginning to “shake off” the stress much quicker, and her resiliency was improving.

At 3 months, few would’ve recognized KO had they just met her in those first 3 days. KO blossomed into a confident and well-socialized girl, who is famous in her building and neighborhood for her rockstar attitude. She now eagerly approaches things she once was afraid of. She rarely shuts down like she did in the beginning. Even a full year later, she continues to impress as she takes on life full force every day.

So have some patience for those magic 3‘s. What’s your pet’s story going to be?