Why Do Dogs Fetch? by Katelyn Schutz, CPDT

Why Do Dogs? Fetch?

Ever have a dog who loved to chase and retrieve the ball? Wonder why your pooch is relentless until you toss her favorite toy? Curious why dogs fetch?

But did you ever wonder WHY your dog likes to fetch so much? Last week’s blog we discussed a similar behavior, “gift giving” in dogs. So this week I decided to break it down the fetch instinct even more.

When you look at the domesticated dog’s closest relatives, such as the wolf or coyote, there is a natural canine behavior called “prey-carrying”. After a hunt, sometimes the wolf will carry the prey back to the den to be consumed safely with the pack, essentially “retrieving” dinner for the family.

Canines are also known to cache meals, similar to the way a squirrel hides it’s nuts. Carrying it’s prey from hiding spot to hiding spot, then retrieving it later during times of hunger or famine, also mimics this natural fetching instinct in canines.

The game of fetch in our pet dogs is suggested to be a simple variation of this “prey-carrying” behavior. Through selective breeding, we encouraged this natural retrieving drive to benefit us, such as hunters with dogs who aid them in bringing back game bird. In the photo, you will see my rescued Springer Spaniel’s natural water retrieving instinct kick in, as he soft mouths the fetch stick, and brings it back to me on shore. Though I may not be “hunting” said fetch stick for dinner, my dog feels the same sense of accomplishment retrieving this arbitrary object regardless.

Though selective breeding can encourage the fetch instinct in our dogs, genetics are not everything! I have met plenty of Retrievers that won’t retrieve, just like I’ve met herding breeds that won’t herd. Every dog is different, each individualistic in their own ways. Just because you have a certain type of dog, does not mean they will exhibit every generalized characteristic of that breed. With that said, some dogs have a stronger “fetch-drive” than others, I suppose. Albeit it be from a strong genetic predisposition, or simply from a learned positive experience of playing with their human.

So next time your dog plops her favorite slobber covered ball in your lap, give it a toss! Maybe somewhere down the line, you can teach her to retrieve you a beer instead 🙂 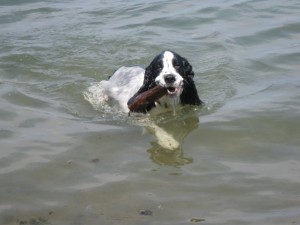