Saying goodbye to my best friend

With a broken and heavy heart I write this blog. I’d like this to be a tribute to a wonderful friend; more faithful, honest, loving and kind than most people, and someone who I will never forget. The lessons I learned from her are too many to document, but we both benefited from the loving relationship we had.

Jessie Mae, age 15 passed this week in the comfort of her own home, on her favorite bed, with her canine friends surrounding her. Any pet owner who knows what I’m going to say next will tear up, no doubt. The hardest part wasn’t coming to the decision of saying goodbye, but WHEN. I knew she was ready but my husband didn’t see it. As we were co-owners, I had to respect his ability, or inability to also say goodbye to her.  I knew it from months ago and just couldn’t do it. Call me selfish. Again, those of you reading this understand-the hardest part is the unfair dichotomy of now or later, and who but G-d knows when its time?

Jessie’s legs had given out the night before. Wes, my husband had to pick her up three times to get her outside to do her business and  once she was outside, stood in a world of her own, not fully understanding what she was doing in 20 degree weather. He came into bed and said, “It’s time.” I started to weep-not because NOW it had to happen, but because that meant we HAD to do it-over and done with, once and for all. I barely slept Monday night thinking of what would instill the following day-now that I had made my decision, would the vet be available, would we have to agonize yet another day, and would poor Jessie have to endure another day lacking mobility? Morning came, she fell three times on her walk and I got her back inside. I called the vet at 7:59 am and stressed the imperative nature that it had to be done quickly and kindly. Our vet rearranged her schedule and was due at 11:15 a.m.

I had a meet and greet that morning. How I got through it, I have no idea. I mean, really, what kind of a masochistic was I-visiting a customer and knowing in ONE short hour that I am saying goodbye to my faithful best friend? I meandered through it, blocking out the inevitable. I got home and collapsed in tears, all over Jessie Mae. My other pups were licking me and enticing me to play; I wanted no part of it. This was Jessie’s time and I loved on her as long and as hard as I could. My best friend Gloria arrived minutes before the vet and when the vet arrived, a huge rock lodged in my throat. It was time.

Wonderful, mystical things happened. Jessie, in her lifetime was not a kisser. In fact, she never kissed me the entire time we loved each other. But, magically, she looked straight into my eyes right before she slept for the last time,  and gave me three big kisses. That did it. Welcome WALL OF TEARS.

Jessie Mae said goodbye to us around 11:22 am on January 24, 2012. Her passing was peaceful and hopefully pain free. I felt her soul soar when she had passed and my husband felt it at exactly the same time. He described it as being completely tense beforehand and at 11:22 he took a deep breath and felt a release-both inside and out. It felt like a pure, clean energy. There she was, my sweet Jessie Mae, no longer for this world, but hopefully at the bridge, meeting our families and past four legged friends, chasing a ball at the beach-her favorite spot. Hopefully my mother, who was afraid of dogs, has now gotten used to the idea that Jessie means her no harm.

The saddest part of this has been the mourning period, not only for Wes and me but of our beloved animals still with us. Seeing our apricot standard, Dixie block the vet from removing Jessie Mae; following her to the car-standing on her hind legs to see what the (#@$%!) is going on…..looking for her still at the window and wondering where her best friend has gone slays me. I’ve tried to be sensitive to them even more, but the pain in my head and my heart overtakes anything else. I’m mystified how I am functioning. My friend Richard explained that the amount of chemicals being released in my body now is equivalent to running 4 marathons. I’m beating myself up because I can’t snap out of it. I want to function again, but in reality, should be kinder to myself and allow my body and spirit to mourn. All I want to do is cry and sleep and have Jessie Mae by my feet again, stroking her velvet soft ears. I’d even take back her early awakenings at 4:30 just to see her and love her again.

Jewish religion suggests that we mourn for a period of one year. The first week we sit Shiva-we block out the windows; put black fabric on mirrors and grieve for a week. From then on in, we pray daily for our departed. Magically, or perhaps wishfully, after the 365 days, our souls have been healed. I pray that I see her again-that I get to smell her and hear her and throw another ball to her, or run the beach with her, or even better, get to kiss her again, even if she is stingy with her kisses. I know it won’t happen but I can dream. And Jessie Mae, please come back to my dreams, as often as you wish. I’m here. I miss you. I can’t stop crying over you. Thank you for being our friend. I’ll never say goodbye to you, but, I’ll see you soon and put my arms around you again. 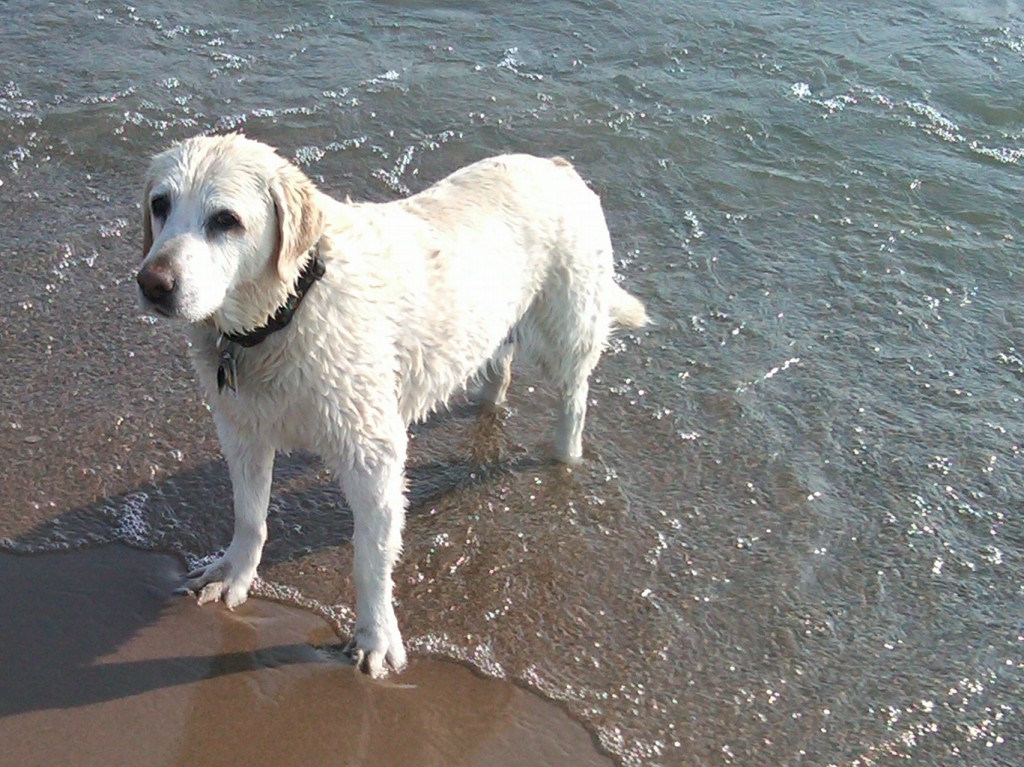 Jessie Mae at her favorite spot