Why do cats rub their faces on things and knead their paws? By Katelyn Schutz, CPDT 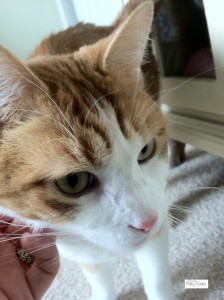 Ever wonder why your cat brushes up against your legs and does that ever so cute chin rub when you’ve returned home for work? Or why your kitty kneads her paws on you while she’s purring away from your loving affection? Simply put, your cat is marking you with his or her pheromones.

Let’s break it down a little bit more… Pheromones are a natural chemical substance that animals emit into the environment to communicate with others. This form of scent communication is seen in all sorts of different species, including us humans! Cats use scent pheromones to signal different behavioral intentions, such as defending a territory, signaling aggression, marking familiar objects, bonding with others, calming nerves, among many other reasons.

Cats, in particular, release these pheromones from glands in their cheeks and chin (known as feline facial pheromones), from their paw pads, and also from their perianal region (near the tukhus). What your cat intends to communicate will determine which gland your kitty uses to “mark” with. Perianal pheromones are a strong form of communication in the feline world, and are considered to be used mostly for territorial marking (“Back off! This is MINE!”), or to announce sexual readiness (“I’m here boys, come and get it!”). Let’s hope your cat is NOT marking you with his or her perianal pheromones! Instead, you are more likely to be marked by your cat’s cheek or chin. These facial pheromones are much less intense than the perianal ones, and are associated with calm, friendly intentions.

When your loving cat comes up and affectionately head butts you, this is his way of bonding with you! He is marking you with his friendly facial pheromones, indicating a sense of familiarity and comfort. Cats often rub against objects this way too, especially around the home, using that scent to remind them an object is safe and familiar. Or perhaps your cat is kneading you with her paws like a mound of dough. The paw pad scent glands have similar intentions as the facial pheromones, in that your cat is marking something familiar.

When your cat affectionately kneads you (without using her claws, let’s hope!), she is putting her scent all over you and saying “You are mine, dearest human!” Conversely, if you cat is using it’s claws (Ouch!), particularly on something in the environment, this is a visual reminder to others that also says, “I own this!”

As a behaviorist, I am thrilled that there are now synthesized cat pheromone products out on the market, to help NATURALLY calm our kitties! They come in a variety of dispensers, including sprays, diffusers, and now they even have collars that last up to 1 month.

Do you have a cat who HATES going in the cat carrier? Try a pheromone spray inside to help make a positive association with the carrier. Have a kitty who behaviorally urinates or defecates outside of the box? Try a pheromone diffuser right near the litter box to encourage your cat to use it.

Did you just move, have a new baby, get a new pet, have some work done on the house? Pheromone collars are a safe and easy way to naturally reduce stress for your kitty 24/7. So next time your cat starts to rub or knead on you, take it as a huge compliment and give your kitty some loving back!