Why do some cats suddenly bite while being pet? By Katelyn Schutz, CPDT

Ever have a cat that seems to be enjoying your affection.. then suddenly turns around and bites the same hand that was just petting it?  Curious why your cat can pull this Dr. Jeykll and Mr. Hyde routine, when you are simply trying to show your love?

Other than house-soiling, feline aggression is the second most common behavioral problem that leads owners to seek out veterinary behavior consultants.  And sadly, aggression is also one of the most common reason owners elect to euthanize, or get rid of their pet cat (again, only secondary to house-soiling).  There are many different types of aggression in cats, such as territorial, redirected, pain-induced, and even play aggression (some of which I will discuss in later blogs).

Today however, I would like to focus on petting-induced aggression, or when a cat bites as a means to say “I’ve had enough” after receiving affection.  Oddly enough, most cats that suffer from this type of aggression actually enjoy social interactions.  Often they even seek it, howling for attention, and initiating touch by jumping onto your lap, or rubbing against your leg or outstretched hand.  But then, what may seem like “out of nowhere”, the cat redirects to the same hand that it just sought affection from.

So why do cats do this?  It’s a controversial topic in the feline behavior world, but many believe it’s simply due to overstimulation.  Repetitive petting can cause your cat to become overly excited, and trigger an arousal-based bite.  Commonly, I see static electricity as a reason for cats to bite during petting.  The repetitive stroking can create little shocks along your cat’s skin, encouraging him to believe your affection is what causes this irritating feeling, creating a negative association with being pet.  Similarly, sometimes pain can play a role in petting-induced aggression, especially in elderly cats that may be arthritic or just not feeling well.  It has been studied and strongly proven that early socialization plays a big role in feline aggression.  A cat who was feral, or not handled well as a kitten, are more prone to petting-induced aggression.  The silver lining from this, is that petting-induced aggression can be prevented by promoting good early socialization, such as frequent, gentle handling and grooming of young cats.

A pleasant scratch can become unpleasant rather quickly for certain cats, and they use their teeth to express their annoyance.  This makes sense, considering cats use aggression to communicate in other aspects of their life too.  They have learned it can be a means to an end, so when the petting becomes uncomfortable for them, they resort to the familiar behavior of aggression to cease it.

Funny enough, most cats with petting-induced aggression don’t seem to do it out of fear, but rather out of confidence!  I frequently hear owners with cats that have this type of aggression say that their cat uses their mouth to get what they want in other ways too.  I had an owner once consult me, believing his cat was in fact “bi-polar” (his words, not mine).  He told me his cat was the sweetest, friendliest cat… most of the time.  But he could never sleep in on the weekends, because his cat would bite him in the face to wake him up to be fed at the “usual” time.  This same cat, when bored or not played with enough, would also stalk his owners ankles from underneath the couch, racing after his feet when he’d walk from room to room, intensely attacking his legs.  Interestingly enough, this cat also suffered from petting-induced aggression, especially when his owner tried to brush the cat, a battle the owner had weekly with his long-haired cat who would constantly get mats if he didn’t groom him.  In conclusion, cats with petting-induced aggression are more likely to exhibit “control-biting” with their owners in other ways, and have learned that biting gets what they want, only reinforcing the aggressive behavior more.

So what do you do if your cat suffers from this petting-induced aggression?  First, educate yourself on your particular cat’s warning signs.  An ounce of prevention is worth a pound of cure, so pay attention to the signals your cat gives just prior to a bite.  Every cat expresses itself differently, but many cats will swish or flick their tail with intent just before a bite.  Their ears will often flatten suddenly.  Some vocalize or hiss prior to attacking.  Their pupils may quickly dilate like a pancake, or abruptly narrow like a sliver.  If you see these intentional communicational signals, respect them!  Cease your affection immediately, calmly stand up, and benevolently leave the petting session.

Some simple desensitization and counter-conditioning training can help increase your cat’s tolerance for affection.  Only attempt these re-training sessions when your cat is in the mood for petting.  First, find your cat’s favorite thing in the world, like a stinky treat or that coveted glitter ball.  Associate these favorite things with your petting sessions, to teach your cat to love being pet!  Discover your cat’s threshold for affection, and discontinue the petting just prior to that threshold, then offer the food or toy reward before your cat shows any signs of twitchy or aggressive behavior.  As your cat improves, gradually increase the amount of petting per session.

Always allow your cat to leave the petting sessions, and do not restrain it in any way.  Never use physical punishment, as it will only worsen the problem.  Do not yell at your cat, or it may escalate it’s aggression.  You want your cat to LOVE these re-training sessions, not feel forced or trapped.

Luckily, a little education on our part goes a long way to working on petting-induced aggression in cats.  Learn about your cat’s warning sign, utilize avoidance to prevent a bite, and re-train your cat to associate petting with all the wonderful things in life… and soon enough you and your cat will be living in happy harmony! 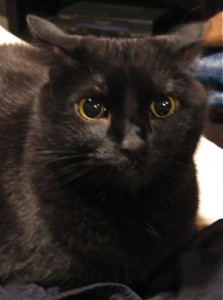